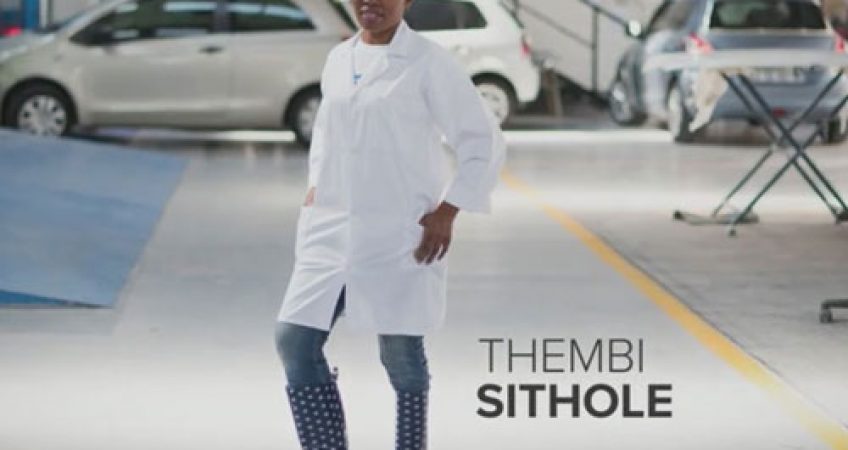 Soon, she was repairing plastic bumpers and promoted to receptionist. 13 years later, Sithole became become an equal partner to her boss and owner of her own motor body repairing business.

“I would help Gavin, my boss at the time, to answer phones and with admin when the workshop was not too busy. He received many compliments from clients about the lady answering the phone and her beautiful voice – and that’s how I landed the receptionist job. I seized every opportunity to learn new skills and was soon doing quotations and estimations,” says Sithole.

After she enrolled for an office administration course, she found employment as an office manager and a general manager in two other companies. She would later cross paths with Gavin, when they decided to open a new motor body repair shop, as equal partners.

G&T Auto – named after Gavin and Thembi – was registered late in 2009 and opened its doors to customers in January 2010. But things did not take off as planned. Sithole soon found herself neck-deep in financial troubles when her partner could no longer contribute his share of the starting capital following the liquidation of his other business.

“We had already signed a 3-year lease agreement and we had to pay R30 000 rent a month, regardless of whether we operated or not. We also leased most of the large equipment and we had these fixed costs to pay. I maxed out all my credit cards paying for the spray booth and rent. I couldn’t obtain bank loans, because I had no salary to present.”

Struggling to keep her new business venture open Sithole took a decision she had been dreading the most:

“When my closest family friend and my last hope vanished, I took my provident fund and invested all the proceeds into the business. It was a huge gamble and not one which I will recommend to people. But, at the time, I felt that had no choice, but to make it work.”

The first year was the toughest for G&T Auto. Sithole did not have enough equipment to be graded by the South African Motor Body Repairers Association (SAMBRA). This meant that she could not get work from insurers. But then she impressed an insurer with the work which G&T did to refurbish two cars that had been written off by another panel beater in the area, and soon more work from the insurer started to come in. G&T was able to purchase more equipment, obtained a SAMBRA grading and broke even later in 2012.

Today, G&T is a fully accredited Major Structural Repairer, meaning that it can repair chassis damages, cut and weld panels together, something for which ordinary panel beaters are not accredited to do. Earlier this year, G&T bagged Mazda accreditation, a rare accolade that will see it repair Mazdas that are still under warranty. Sithole says it is chasing more accreditations of this nature from other car brands.

“We have gained confidence to go for bigger contracts because we understand our business better now and we understand the standards we need to meet to get manufacture approvals. In the past I did not understand my financial statements at all, so our loan applications were unsuccessful,” says Sithole.

Thembi joined the Sanlam Enterprise and Supplier Development programme late last year. The business mentors assigned to her picked up that her finances and marketing efforts were lagging. Not only did she not understand her financial records, but she also spent more time doing admin work instead of growing her client base.

Today Sithole employs 15 people and has an annual turnover of more than R6.5 million

Adapted from a press release.

Did you find apk for android? You can find new Free Android Games and apps.
Share: